United States Under Secretary of State Jose Fernández will be visiting Tegucigalpa on Thursday with a rich agenda alongside job creators of the HUGE (Honduras, USA, Guatemala, El Salvador) Business and Investment Council. Investors from the US and Northern Triangle region will meet with the Under Secretary to discuss nearshoring, workforce development, textile and apparel industry growth, trade policy, energy reform, financial inclusion, and engagement with civil society. Mr. Fernández is the Under Secretary for Economic Growth, Energy, and the Environment at the US Department of State.

“We welcome Under Secretary Fernández, who has shown an inspiring commitment to work with stakeholders in Honduras, Guatemala, El Salvador, and the US, especially the private sector as job creators. We will make the most of our shared focus towards strengthening institutions, investing in renewable energy solutions, and removing the obstacles that are impeding inclusive financing for small, medium, and woman-owned enterprises”, said Dr. Juan José Daboub, President of the HUGE Business and Investment Council.

Jesús Canahuati, President of Elcatex and one of HUGE’s Founding members described the opportunity stating that “nearshoring and investments in automation projects in our region enable the development of sustainable supply chains, creating thousands of new jobs in the four countries.” Elcatex has been a leader in innovation and growth within the region for over 35 years and has recently committed to investments in excess of $140 million, towards expansion in yarn, textile and apparel operations. These investments alone represent 7,000 new direct jobs in the region.

HUGE is a non-profit business association 501(c)(6) which represents the first joint effort of private-sector job creators from all three Central American countries and their US counterparts to drive massive job creation in these countries, including the US.

In its first year, the organization has assembled an inventory of at least nine projects worth some $1.9 billion thanks to the leadership and commitment of its Founders, to a positive and constructive relationship between Honduras, Guatemala, El Salvador, and the US. These investments and others yet to come will be in areas such as new manufacturing facilities, competitive energy, US 5G technology, roads, ports, education, and technology. “Financing strategic projects that create multiple well-paid jobs is our priority,” said HUGE Vice President and President of Grupo Financiero Ficohsa, Camilo Atala. He added, “Ficohsa’s regional presence facilitates the inclusiveness of small and medium-sized companies that are crucial in the value chain of all of these investment opportunities.”

Similar to Elcatex, Intradeco Holdings through its subsidiary Central American Spinning Works, has invested heavily recently, with a direct investment of $100 million in a state-of-the-art ring spinning mill in Choloma, Honduras. The new facility began operations in early 2022. Simultaneously, in El Salvador, HUGE Founder Intradeco has installed another plant that will sustainably manufacture garments using 100% recycled yarns. Further, the company will expand its solar energy generation capacity to 30 MW by the third quarter of 2022. Felix Siman, Intradeco Chairman commented on this major expansion, “through these investments, our company is helping to create an additional 1,000 high-quality jobs in the US, El Salvador, and Honduras, while contributing to the region’s environmental sustainability objectives.”
Another major investment has been made by The Hidrovolcan Group, which generates electricity using renewable sources including solar, hydro, and geothermal. The company is implementing the $680 million “El Tornillito” hydro project which will be the largest private investment in green energy in Honduras. It will produce 200 MW of electricity in Northern Honduras and open a large fertile area for agriculture and significantly reduce the risk of flooding in the area devastated by hurricanes Eta and Iota in November 2020. “Our project will improve the living and working conditions for thousands of low-income Hondurans who otherwise may be forced to emigrate due to lack of employable skills and job opportunities. We are providing training to qualify local people in technical skills such as carpentry, welding, and electricity to meet the needs of our project and to open other opportunities for them in Honduras,” said HUGE Founder Luis Larach.

Finally, Guatemalan company Imperialtex has invested over $100 million in Central America, most recently in a new state-of-the-art yarn spinning mill that is due to begin operations later this year, and further expand its existing textile manufacturing and yarn spinning facilities. Imperialtex creates over 6,000 direct and indirect jobs throughout Guatemala and the other Northern Triangle countries, with specific emphasis in rural areas where opportunities can be difficult to find. Roberto Zaid, President of Grupo Imperial underscored the sense of obligation his family-owned company has to the region, “We have the capacity, the ability, and the responsibility to continue to provide formal jobs to our community while keeping environmental sustainability objectives in mind.”

HUGE is also working with the public sector and civil society in all four countries to responsibly address supply chain disruptions caused by COVID and the economic tensions between the US and China. “This is a HUGE opportunity for the Northern Triangle countries of Central America. Let’s take advantage of it!”, said Greg Huger, Executive Director of the HUGE Business and Investment Council, who this week visited several important projects in both San Pedro Sula and Tegucigalpa with members of the Under Secretary’s DC-based team. 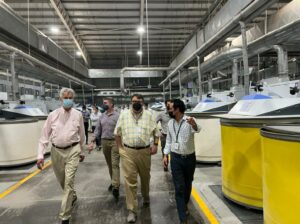 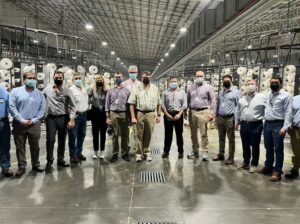